We decided to eat breakfast together before AJ set out. We had a great dinner at the Bar last night. As we get closer to the coast the menú is changing. More seafood. Aj had Orejade cerdo, pigs ear. He has tried all sorts of stuff. I played it safe with paella and then chicken. We have these marvelous dinners, I think I may have mentioned it before, the pilgrims menu. There are always 3 courses and a jug of wine. The last few places we have had fantastic home cooked meals. Homemade wines and desserts. Last night I had made a piece of Santiago cake, and the husband tells us his wife makes this herself, he then poured wine over it as he served it. I already loved it, now over the moon about it! Everyone, truly, well I would have to rethink that, there have been a few people who could have been a little nicer, but I want my rose colored glasses on, everyone has been so nice, treated us so well, it just makes your day when someone is kind to you. Maybe it’s the language barrier thing, they are certainly trying to give us what we want even if they don’t know what that is. Last night while we were at dinner, the woman from the albergue did are laundry so we could go eat earlier. We were tired, wet and hungry, she said just go. We came back, all done. AJ said, he felt rejuvenated just having clothes that didn’t smell. Also he decided to walk with us again, the rest of the way, into Santiago!! Made my day!

Well it’s still raining. Not really bad, but I am starting to really hate my raincoat. You either hot and sweaty or cold and clammy. The sun is trying to come out.

Al takes off his rain poncho, and of course it pours, really rains, by the time we get him back into it, he is drenched. 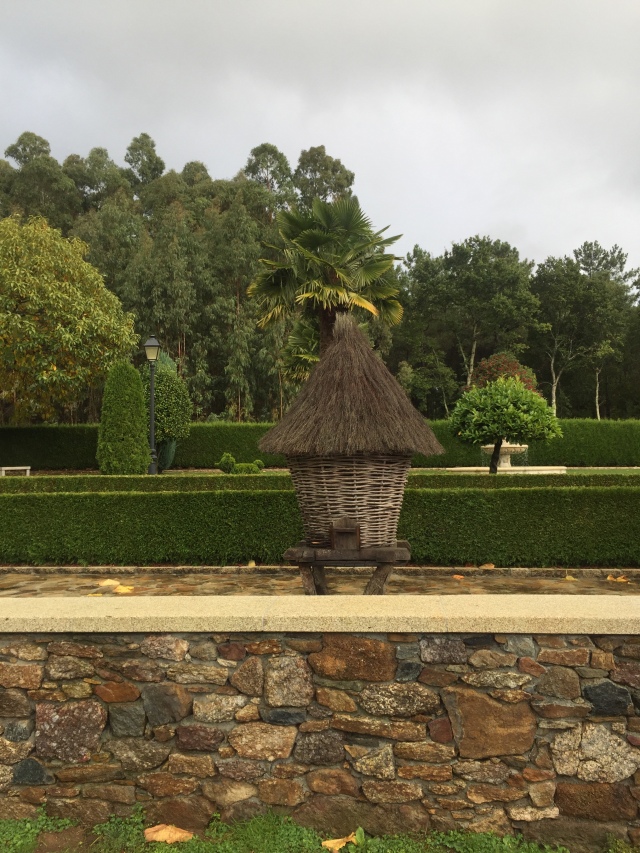 Then, hello Dolly, finally the rainbow i have been looking for

I just love all the plants here, no idea about this one. 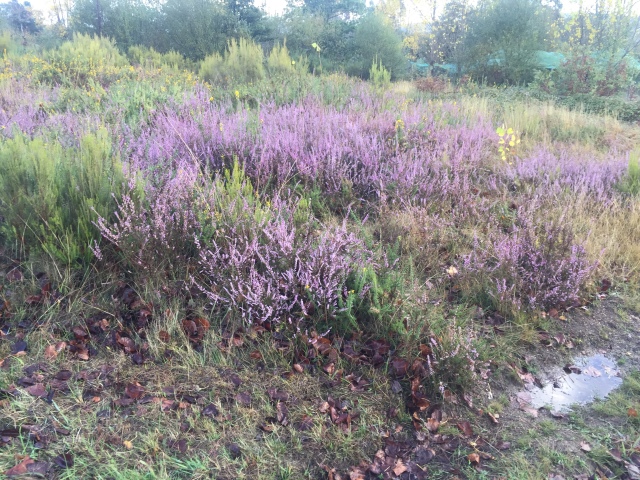 We talk about them, especially the forests and groves of trees. I want to find out why are there groves of this tree or that?

Are they wind breaks? For paper? Housing? They are beautiful, maybe just for that, I don’t know.

Finally a town, which means a break. 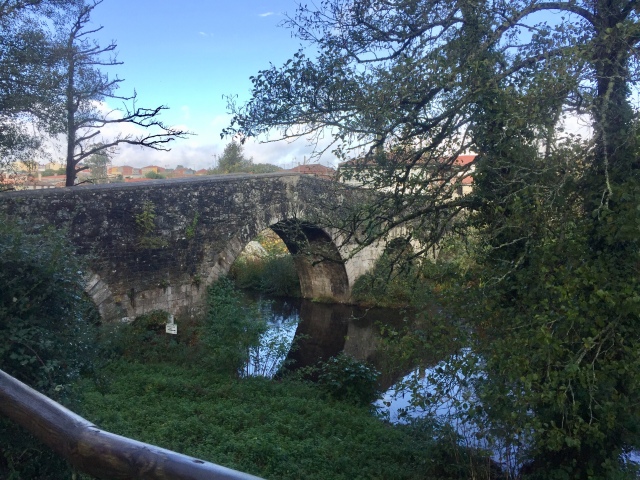 First we have to find a place, which is sometimes not that easy. We follow the Camino, the arrows, way marks, if it’s not on the caminó, we walk right by. We do find a place, that has kiwis growing on a trellis. I am all agog and have to find the person who owns it and ask questions. He says they won’t really be ripe until December, then they pick and preserve them. It was a great place. They also bottle their own liquor, with herbs. AJ has seen this a few times. A first for us, very nice.

AJ bought us lunch, which wasn’t fancy but it was good and just what we needed. I think we walked a bit faster after that. Aches and pains seemed to be gone, could have been that herb liquor.

We continued on. Some towns we go through are older, very small. The bigger towns have the outskirts 1st, which are sometimes a mix, always up a hill, then the newer then and always the really old and churches, lots of stone churches.

We are down to the last 50km 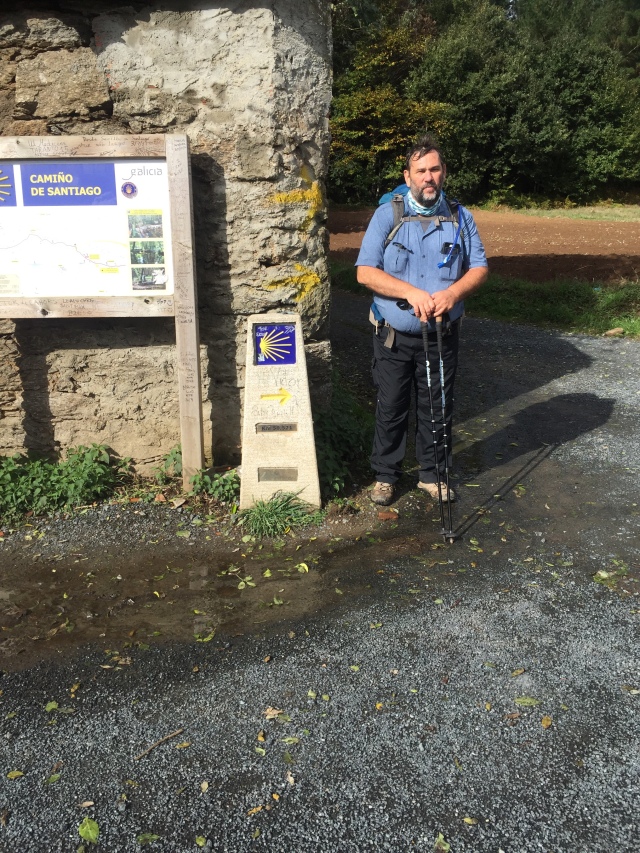 If AJ had left us and walked on, he would be walking into Santiago tomorrow. He has literally walked across Spain in 22 days! 780 kms!!!No taxis or buses for him. I have really enjoyed this time with him. He is a man now, 26 years old and he is such a great person. I know I am his mom but seriously he is. One night a couple of weeks ago when we met up, there was a woman eating alone, we had already started but he invited this stranger to eat with us. She was Hungarian and didn’t speak any English. She joins us, gets out her phone to translate and tries to apologize for not speaking our language. AJ says no apologies needed, you speak better English then we speak Hungarian. Then he made her feel welcome and we enjoyed the rest of our meal together. 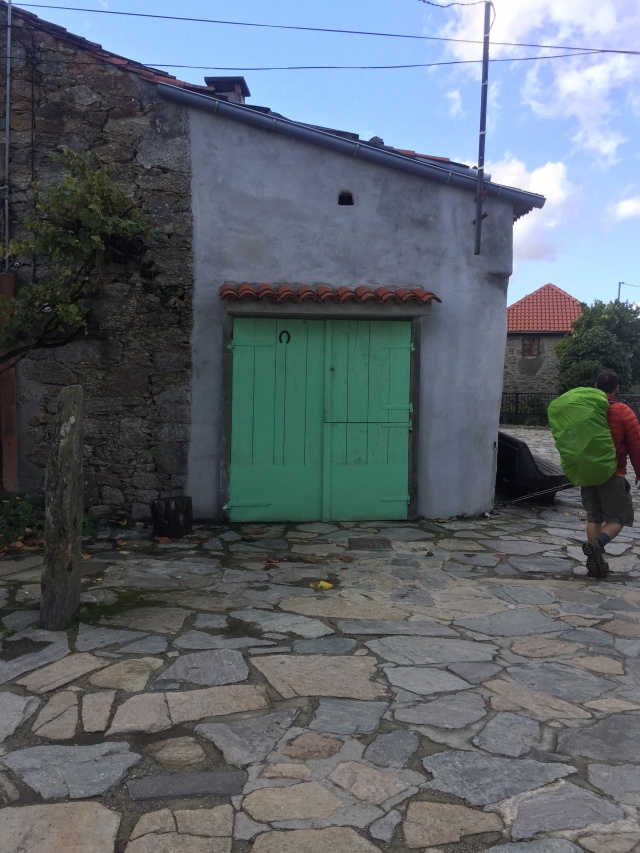 The sun has been in and out most of the day, but only light rain here and there. 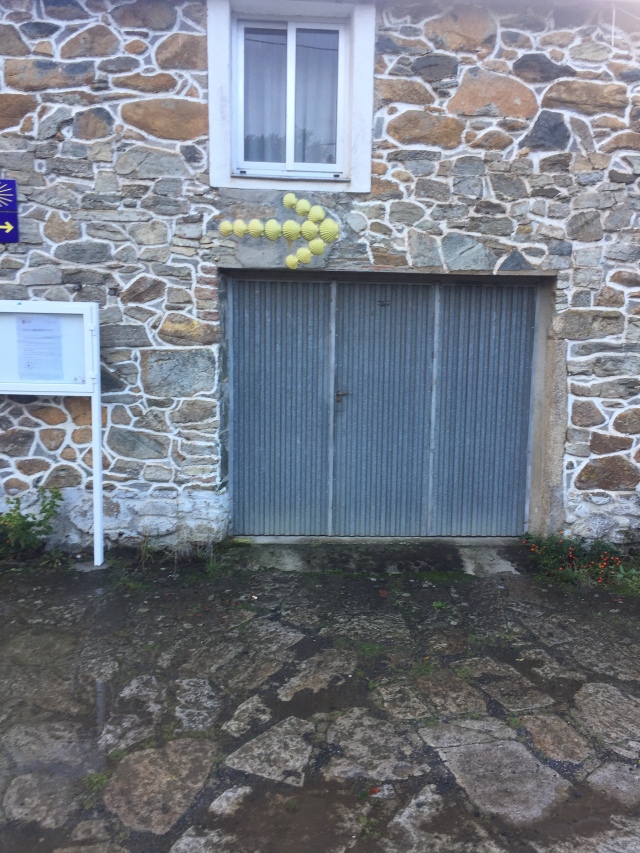 We walk until almost 5, we didn’t get as far as we wanted but decide to stop in Arzúa.