Today not so good. We still have our son with us until after breakfast, then the plan is to explore Leon and tour the cathedral. Well first I want to let you know AJ feels better!

Then he discovers that at some point in time the instant coffee he has been carrying in his backpack opened, and it’s a wet sticky mess everywhere. Mine, never go on a long trip without it is in a small pocket with my granola bars. Some he could just shake off, but his backpack itself needed to be cleaned. So he spent some time in the shower with his backpack.Then wiping down all his stuff.

We have breakfast and he continues on walking out of Leon. We head to the cathedral. 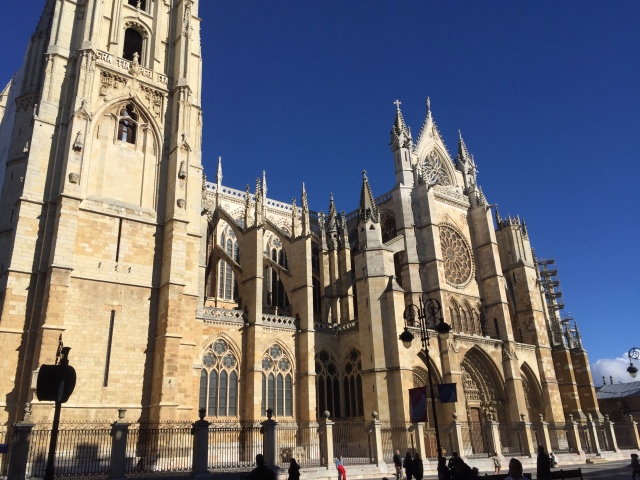 The Cathedral of Leon, also called the house of lights. It seems that a lot of historic places are built on top of others. We saw that in Burgos also. This was built upon old Roman baths. It was built in the gothic style in the 13th century. The doors are incredible. 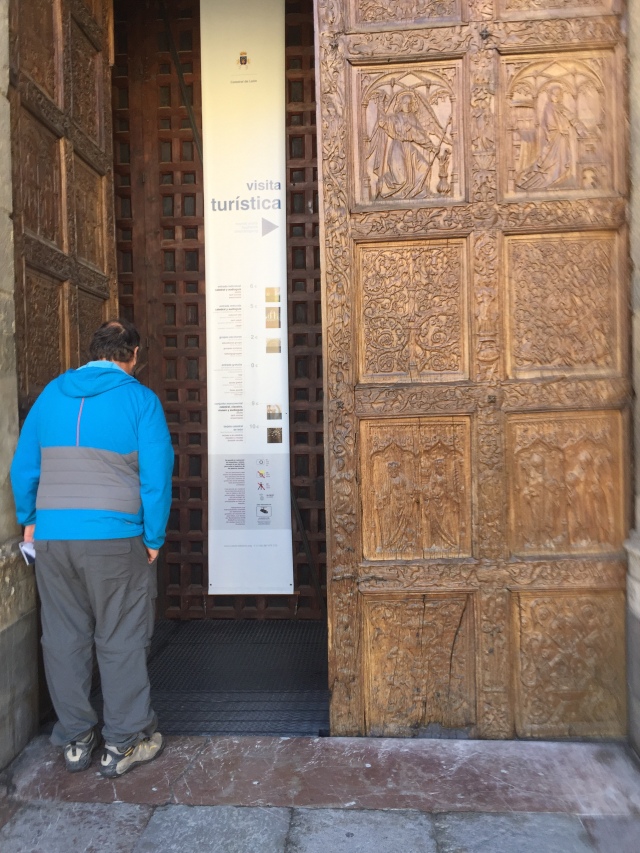 Above the door, you just cannot fit some of these images in the same frame. 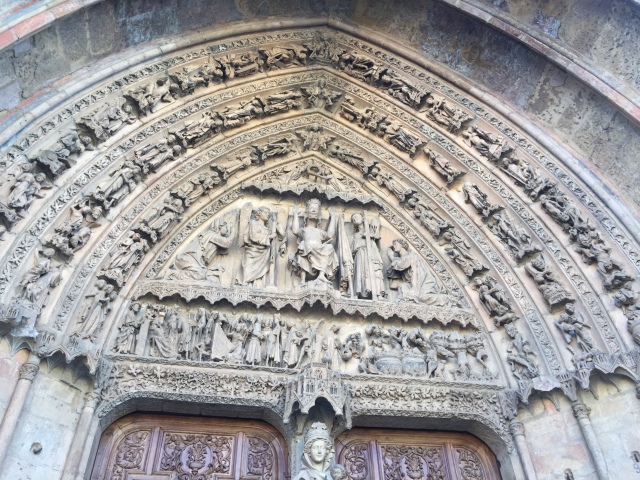 We pay our money and get inside. 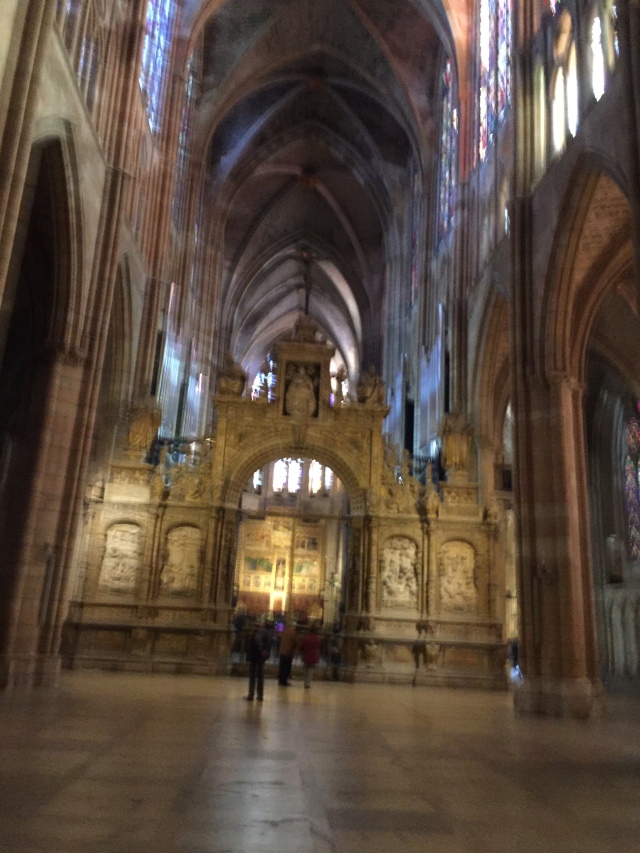 Sorry this one was blurred a bit. It shows the inside from where we come in straight back, but separated by chorus area.

One small window out of many. 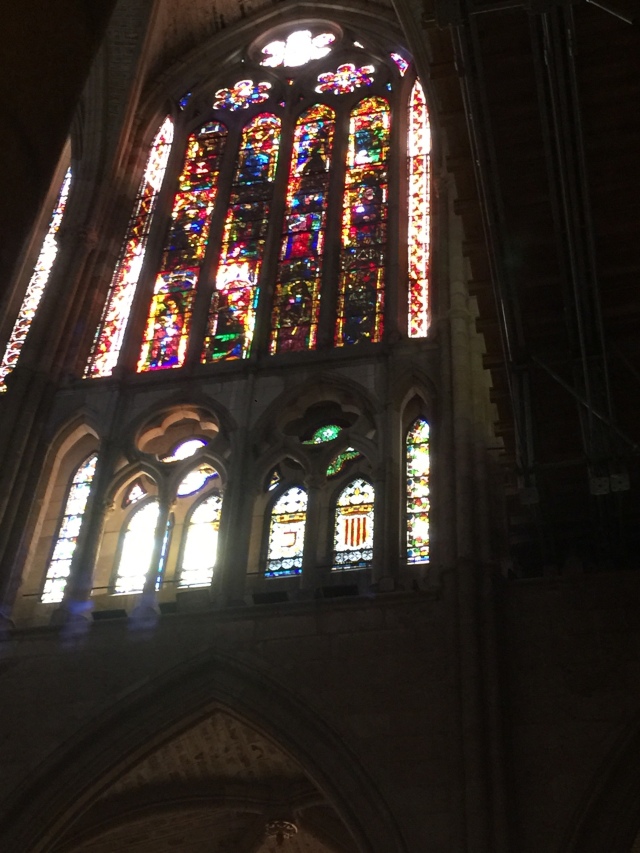 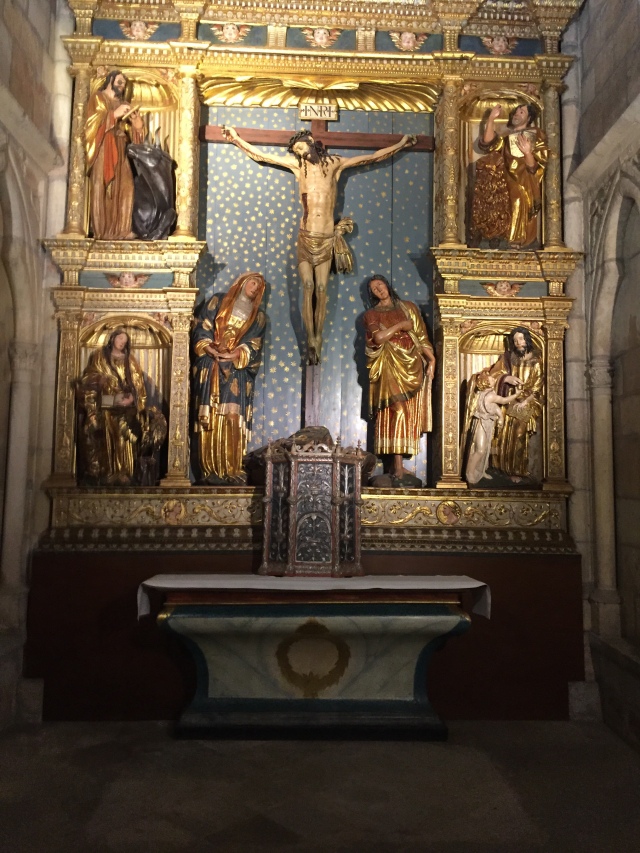 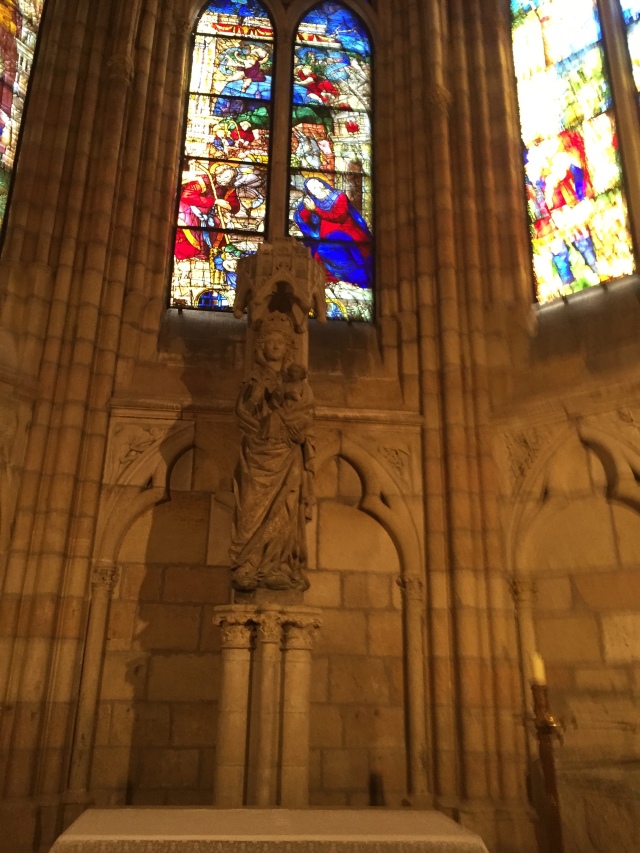 This one was smaller but I liked all the animals on it. 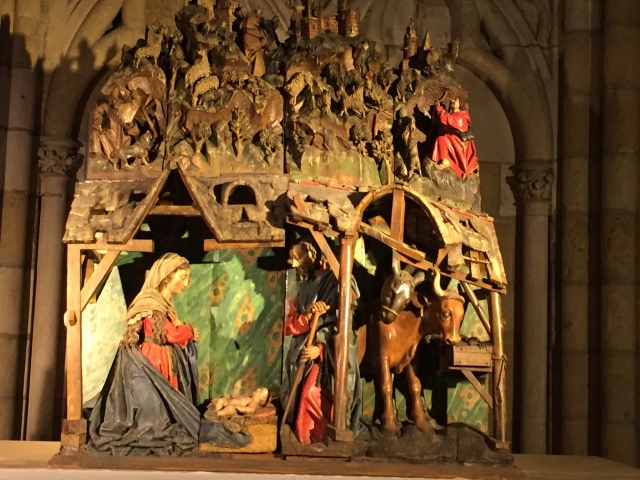 The doors, I just love them! 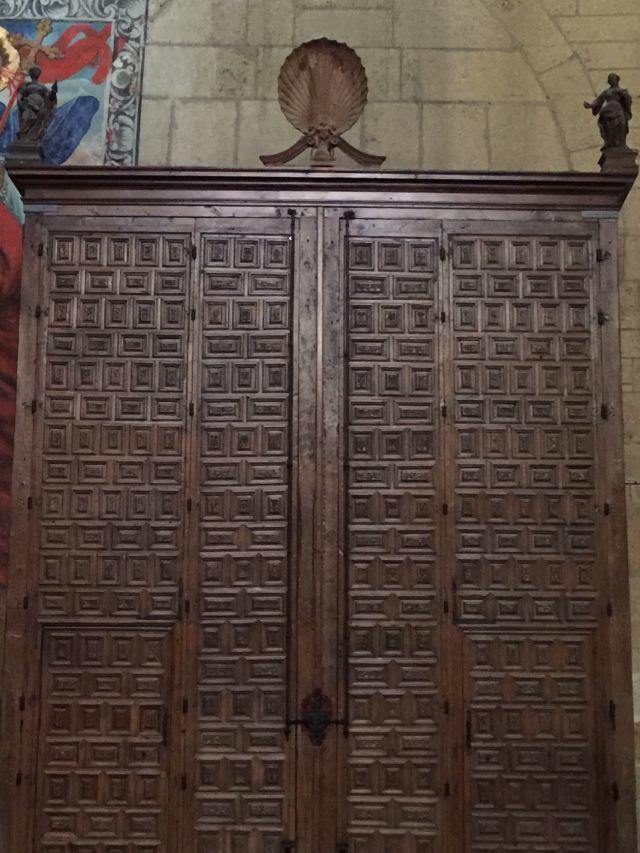 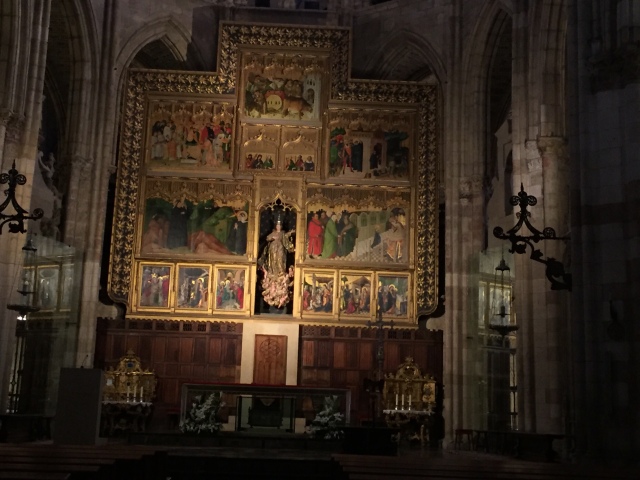 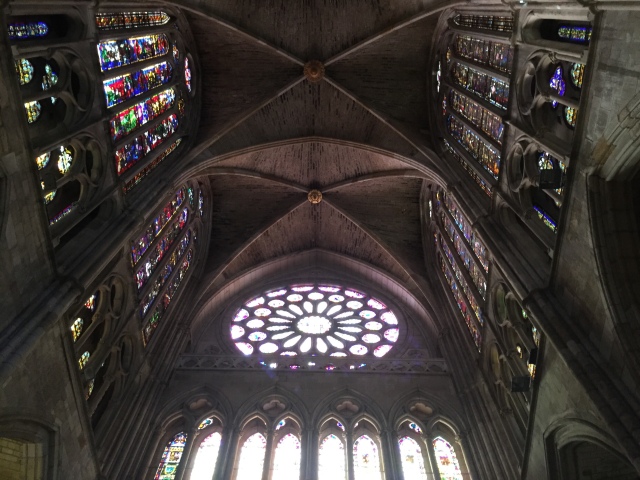 The cathedral was big we spent over an hour in there listening on our head sets. I couldn’t capture the majesty of the place. It was incredible!

I was coughing a bit on the inside, I noticed people giving me a wide berth. AJ had said that morning and Al had agreed, I really should see someone. So right after the cathedral I said I would go get checked out. Well that took a very long time and I will give you the condensed version.

I have a respiratory infection. I had X-rays, tests, a shot, several treatments and I had to promise to not walk, not carry a backpack for 3 days. Got several prescriptions and I was cut loose.

Something good to know, the prescriptions, cost me less then 1 co-pay of 1 it would cost back home. Also, I should say last time I was prepared for worse case scenarios. My Doctor gave me medicine in case I got sick, October has historically been a bad month for me. I have had a good year and was cleared to go. And of course when I had the medicine I never needed it. That just seems to be the way of it. 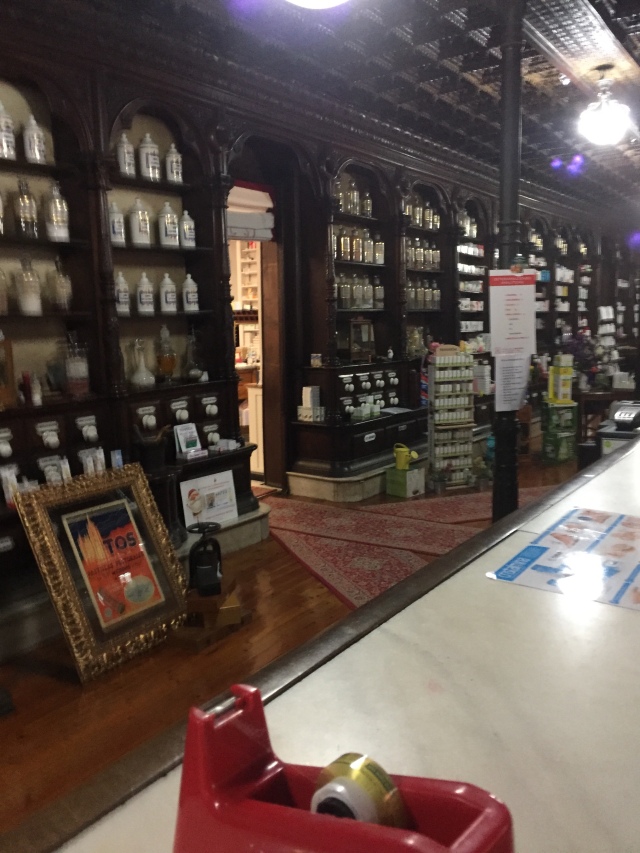 The pharmacy was incredible also! It has been a working pharmacy since the 1800’s.

We did try to take a train out last night, they are fast and not that expensive. It just wasn’t working out for us. Then we tried the bus, we wanted to find a place out of the damp weather for us to rest.

We can stay at an Albergue if we are walking but there are rules. In by 10pm out by 8 am, and you can’t check in till 2 or 3. So that makes it complicated. Doctor said I could show all my private medical documents and get them to let me stay. Well Albergues are big and crowded lately, Al didn’t want to stay in one because he said next I will have the stomach thing to go with everything else.

Well after lots of round and round, we hadn’t eaten since breakfast and I was exhausted. So we found an Albergue. This was supposed to be an inexpensive getaway. I haven’t given up yet!

This was crossing the bridge back towards Cathedral area and hopefully a bed. 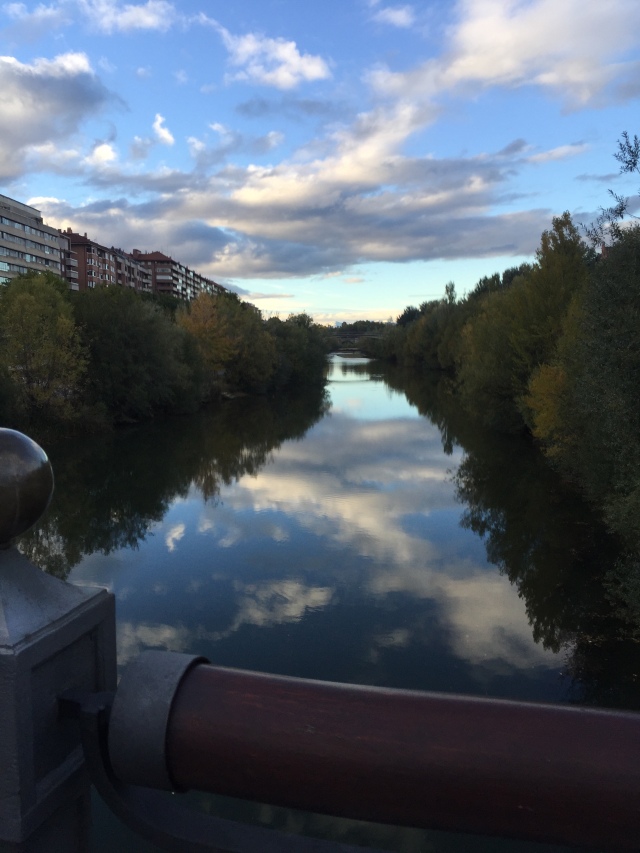 By the time we found an Albergue it was close to 8pm, very late but a huge place so we got two bottom bunks side by side.

Tomorrow we will try to catch a bus again further up the Camino and take it slow, see how it goes.