This was not a good day. When Al comes down stairs when we are leaving he tells me he was up several times in the night throwing up, as well long spells sitting in the restroom. You know what I mean. During dinner we had overheard a woman complaining about not being able to eat. There were others as well. There is sickness on the Camino. Lots blame it on the water, which I guess it could be. Anyway we urged Al to take a bus today, he wouldn’t. I said at least send your backpack ahead. Nope. So we walked, slowly. Al had to make several trips to the woods. Remember this is that long stretch for 17km. No shops, bars, coffee stops, no nothing but dirt trail for several hours. Our son AJ decided to walk with us, we assured him the night before we are now seasoned walkers and we could keep up. Well we couldn’t. AJ ended up carrying Al’s backpack as well as his own. One backpack in the front and one the back.

Al still couldn’t really walk, constantly having to rest. At one point we got to a place set up with chairs and benches. Al just lays on the ground. Some others come by, they give us some medicine for nausea and a phone number for a taxi. They said one of their group was also feeling ill and the sister at the albergue gave them a number saying no matter where you are they will come.

Well Al took the medicine, and we walked some more. Then he said he couldn’t go on and needed the taxi. Well that was difficult. None of us can really speak Spanish. We each know a bit and get by, but on the phone, it’s not the same. They say 5 minutes, after 15 we start walking again. Then our phone rings and it’s the taxi people saying ok, where are you again? The Camino? It was lots of repeating and saying yes I can hear you, finally they say 15 minutes. We wait almost half an hour. Then we start walking again. Then a cloud of dust is racing down the path, it’s the taxi. Al leaves and I stay and walk with AJ. Al goes to at the end of the page, to Terradillos.

Well what a day it was, snowing when we left and we were now getting pelted with hail. We made it to the the end of 17km and stopped for coffee at a pub. We were soon off again and did ten more km to get where Al is.

He took a nap and was much better. Because he was essentially the 1st pilgrim in, he got to pick us a spot. A room with only 3 beds, no bunks. So we had a private room all to ourselves and it was only 10e for each of us! The Camino is fantastic!

I have seen so many people who are so caring and willing to share with you what they have. When I made the chicken soup, I am used to cooking for a crowd, there was plenty to share. I have also noticed this Camino a lot of people hardly ever buying things to eat, you can get by, by what you find along the road or what you take from the kitchens. We always leave milk behind, we have left eggs and yogurts, lots of things. Everyone leaves bits and pieces. So the next pilgrim who comes along without a lot of money can manage on that. I’ve seen it. There’s bags of rice, pasta, sugar, salt all kinds of stuff. The Camino is not something that costs lots of money. You could certainly spend a lot if you wanted to. We always choose municipal albergues, there’s private hostels, B&B’s, and a few times now we have stayed in ones that are donation only. So for some that’s all they do, they pay what they can afford and don’t spend on anything they don’t have to.

We also cook our own food, choose not to eat out. The other night Al had me go to the store alone, I got milk, yogurt, canned pineapple and juice. I still had some cereal in my backpack we hadn’t finished from before. I was tired and it was easy and cost about 5e, and we still have some for breakfast! Win win!

Tonight we got a pilgrim meal and ate with AJ. It was nice. Pilgrim meals are usually great. They always start you out with, bread, a bottle of wine and a jug of water. Then there’s usually a choice, soup, salad, which is a whole another conversation,

or some vegetables. Then the main thing, also sometimes served with a side. Could be chicken, we see this the most, fish, a whole fish, or beef, maybe paella. 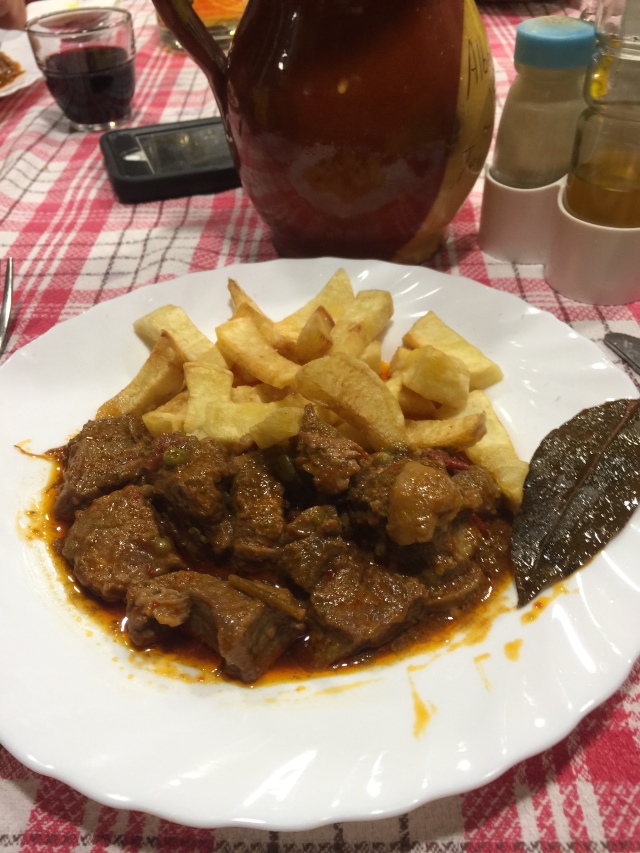 Which is a good place to end.