St. Jean Pied de Port is a beautiful town with medieval cobbled streets.I have only seen it in the dark. Twice now we have stayed here, slipping in and out in the twilight to begin our walk. Pied-de-Port means ‘foot of the pass’ in Pyrenean French. Some people starting the Camino chose to start their walk in Roncesvalles and miss the hike over the Pyrenees. Not foolish us.

Leaving town we walked through the gate of Saint James. 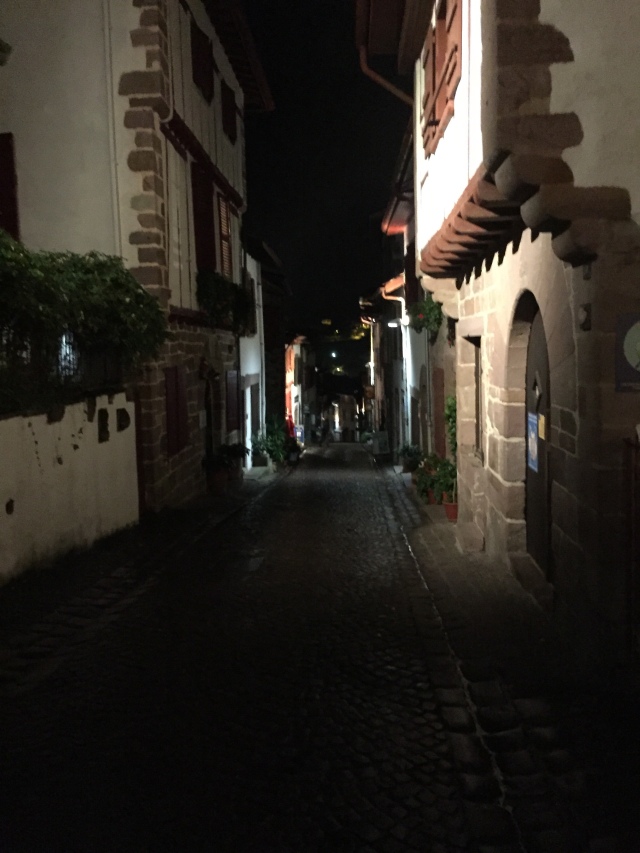 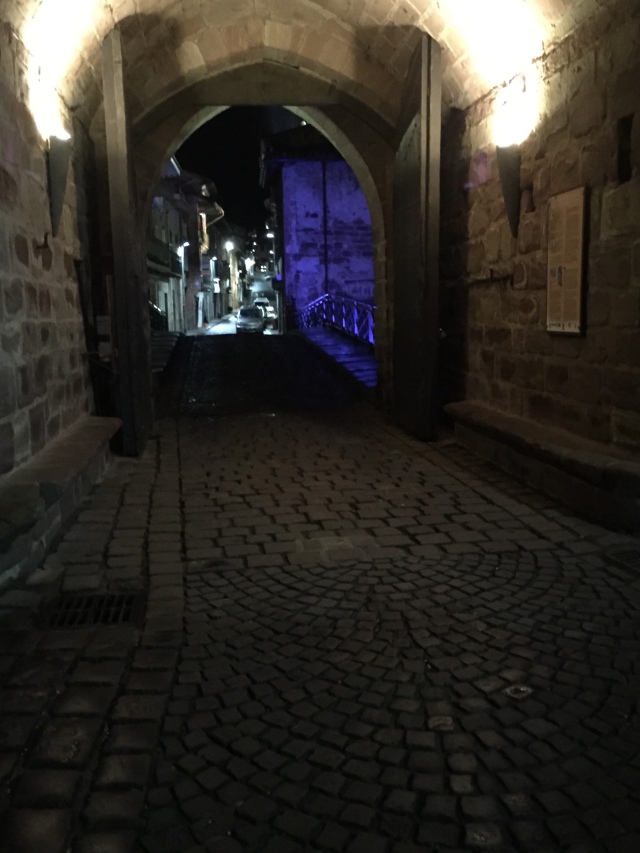 Then there are two choices to make when you leave town, the easier way, the Valcarlos Route, which is used a lot in bad weather or the much more difficult route, the Route de Napoleon, which travels over the Pass of Roncesvalles. This is what we did last time and it’s supposed to be a beautiful day but It is arduous! It winds up for 20km and then steeply down for 5km.

It was drizzling when we left town, I had on rain gear Al choose just a jacket. The beginning not so bad, but we made some mistakes, Al made a big one, he did not fill his water bladder. Which was serious! No matter what, always carry water, even if you don’t think you will need it, someone else may. Which we did. I filled up my bottle, which we were sharing. 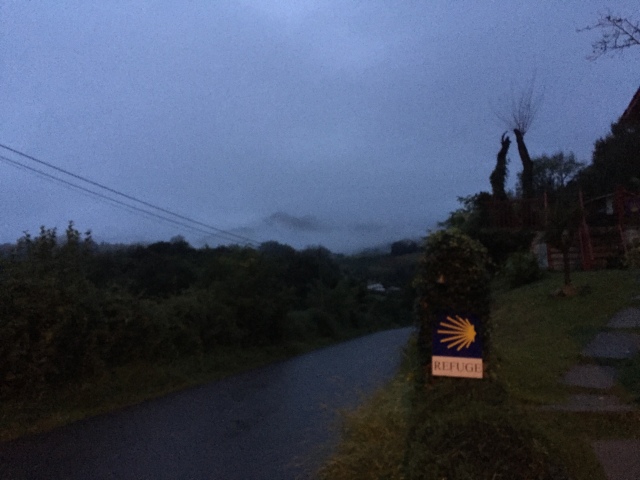 Our first glimpse of the Pyrenees, which is a range of mountains separating Spain and France. 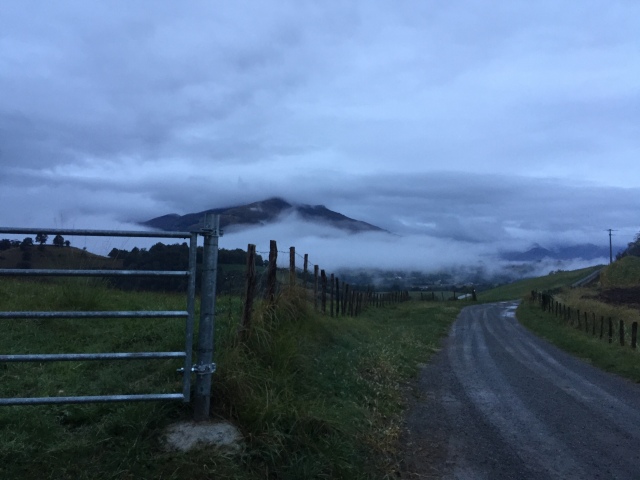 We are slowly getting closer and haven’t yet realized the danger we have set ourselves up for. 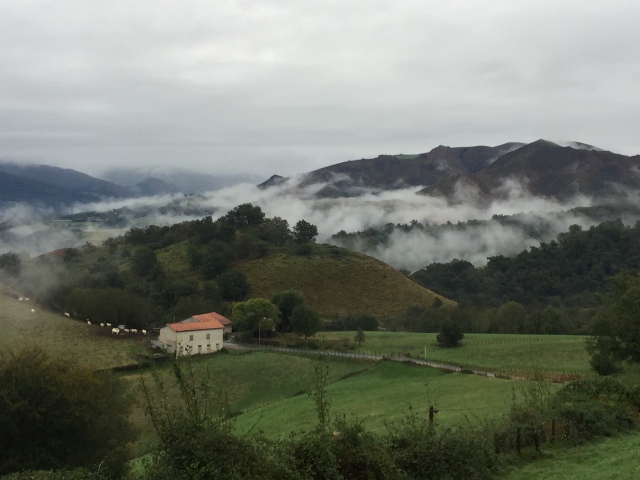 Yes, we will be crossing these mountains. As we get higher the views get more and more impressive. We will reach the Col de Lepoeder at 1,450m. 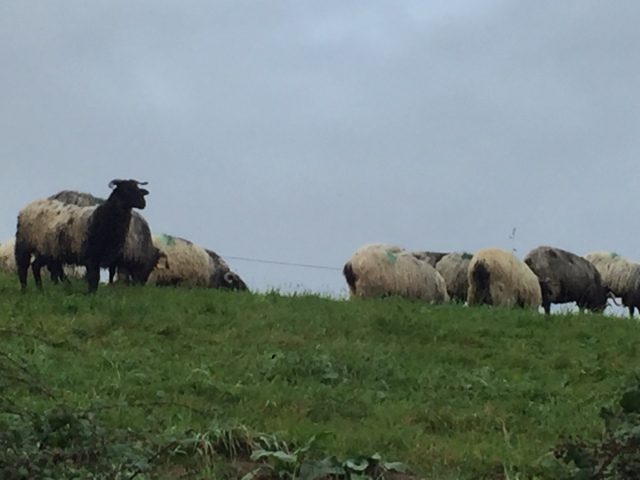 In the pastures are many animals, they seem to all free range together. We walked through herds of sheep, horses and cows. 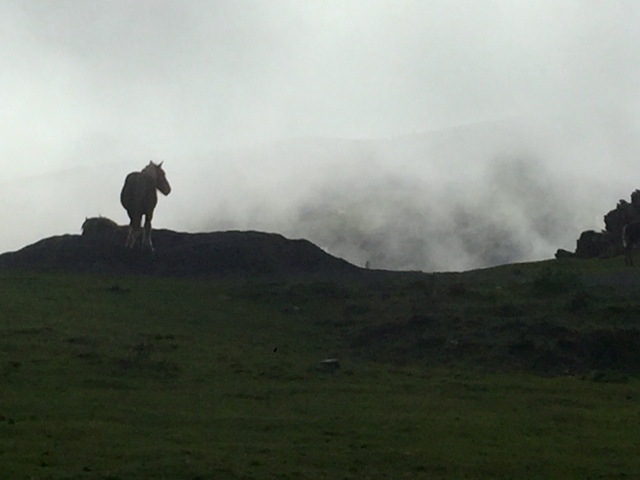 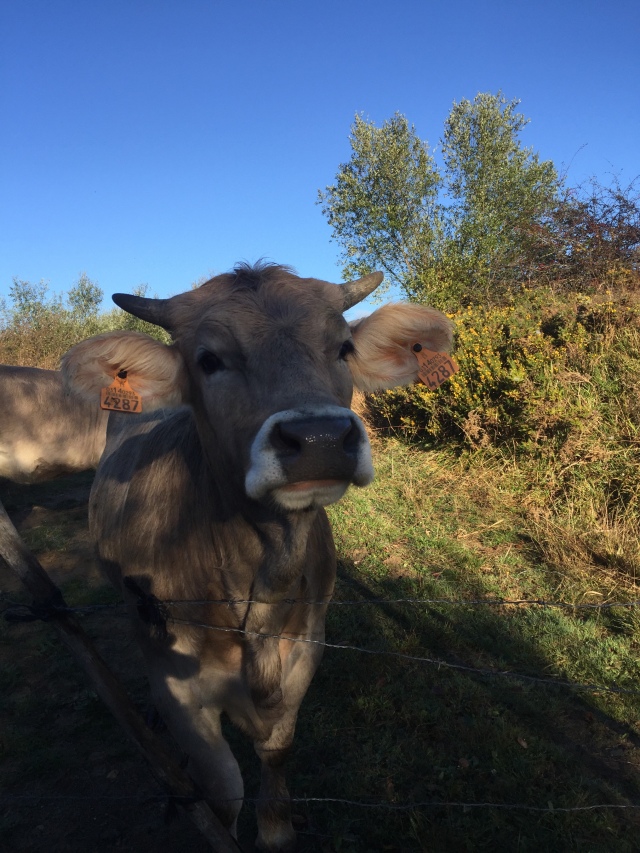 We emptied my water by now and we had the opportunity to fill it up again, we could have filled Als container, but we did not. Big mistake! 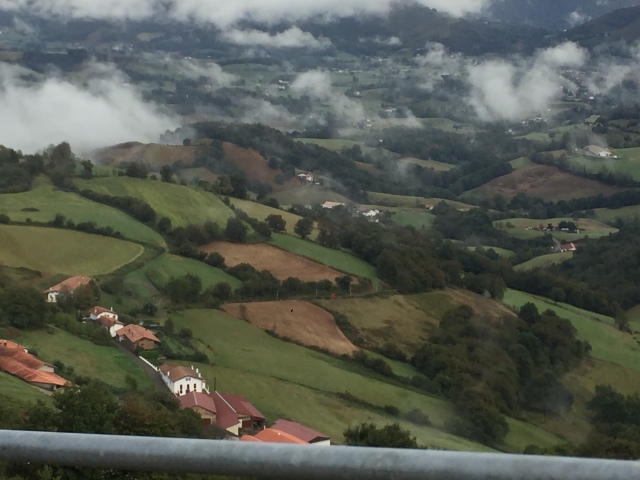  We tried to ration our water and when we were down to just half bottle just Al was drinking it because he was in dire straits. 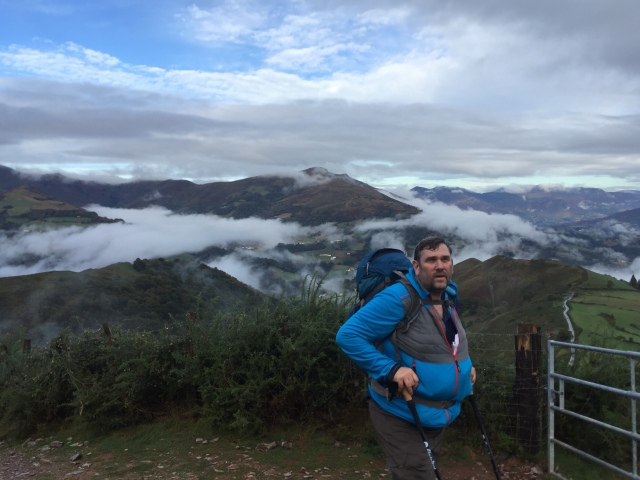 The road winds around, you think this is it, around the corner is the top, nope another hill to climb. 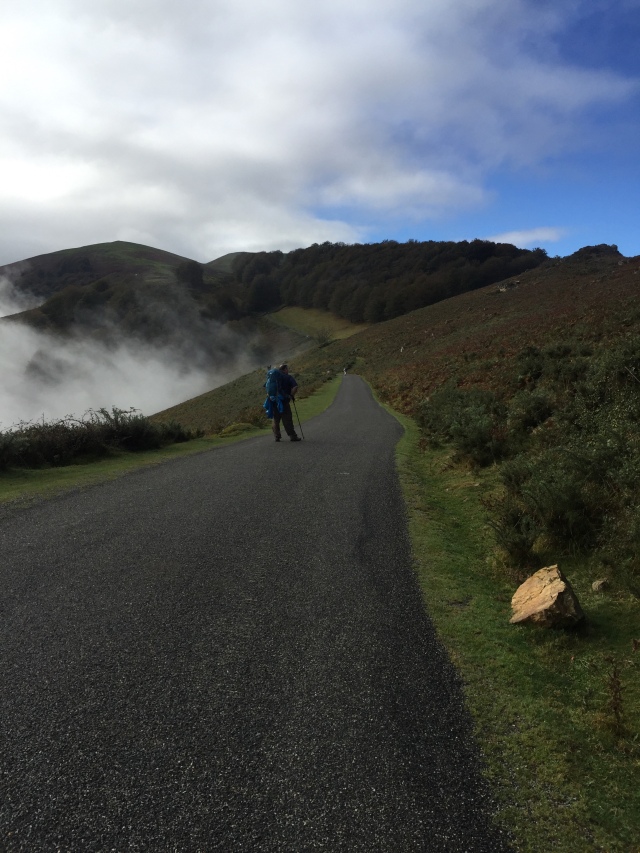 We decide after another rest, Al is going to rest longer and I am going to go ahead to get water at the fountain after the peak. But that was also farther than we thought.

I asked other pilgrims if any had spare water and a generous person gave me half a bottle. I hurried on knowing this wasn’t enough for Al, it barely slacked my thirst. There was a food truck there selling things and as I had no money another generous person paid for two bottles for me.

I dropped my pack there and hurried back to Al. He thought he wasn’t going to make it but I arrived and he drank one bottle down. He felt he could now walk so I carried his pack and we reached the summit. 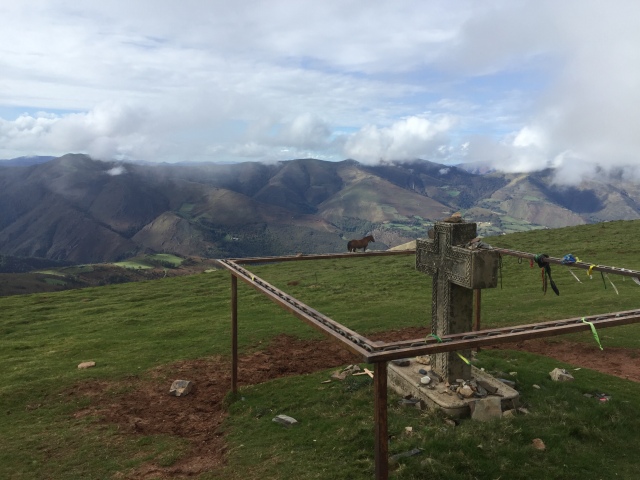 We shared the second bottle of water because it turns out the fountain was still 3km’s ahead. 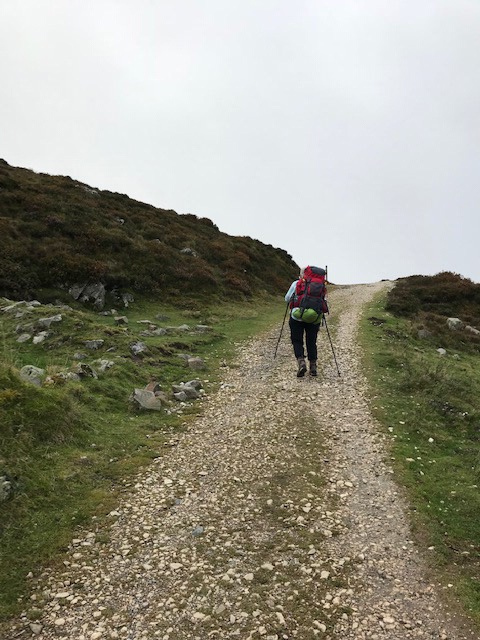 I had to drop my pack a couple more times and run back and then carry his until we finally made it to the fountain. He didn’t feel better until he drank 3 more bottles of water. I think we were both dehydrated.

Going down wasn’t that much easier, we were both running on empty. I was hurting all over and could feel the blisters forming on my feet. 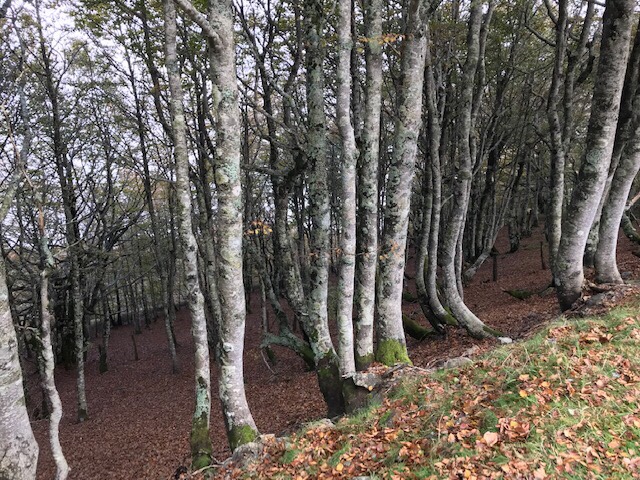 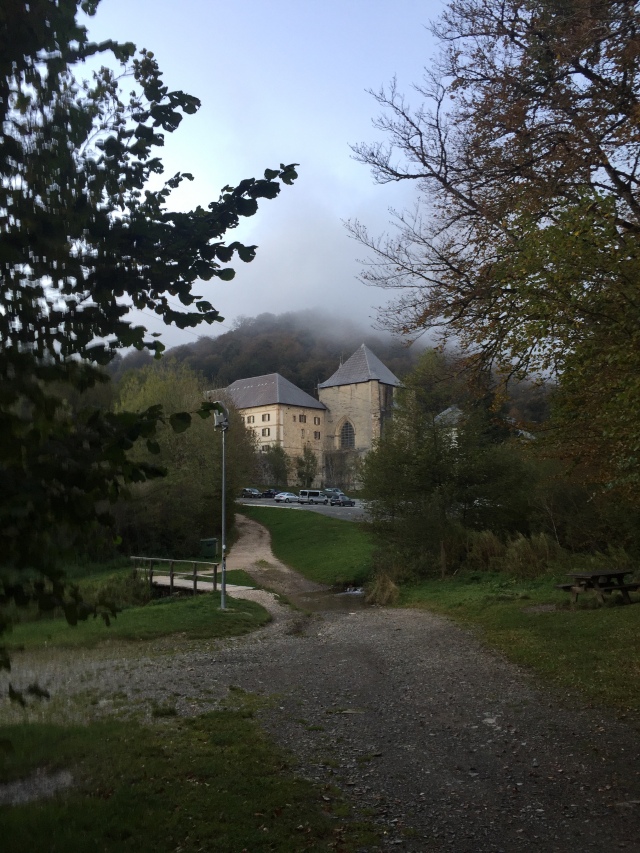 The monastery at Roncesvalles, where we are assigned beds 117 & 119.

5 comments on “Out of St. Jean and onto the. Pyrenees”