First let me say, another Holiday Inn Express and more great people. we checked in at midnight and they were fantastic!
First day in Bath, pouring rain! But we have raincoats so we are out the door early and walking into town. It is only a 20 minute walk but cold and wet. We had to cross the Victoria Bridge, which is in the process of being repaired. the old bridge was becoming unsafe, so this bridge is a temporary one and has ropes and scaffolding all over the place. there is driving rain, fierce winds, plastic is flapping and I march right across. the new me. We are going to the Roman Baths!
The Roman Baths date back over 2000 years. This is the first attraction we have had to pay for. We get our headsets and are off. Al thinks mine must be on fast forward because he can never seem to keep up with me!
Bath is a beautiful city, the river winds through it and there are a few bridges. Lots of shops, pubs, boutiques and people. The sun comes out and we pack our rain gear away. We go in and out of lots of shops, and we have tea.
We have what they call, “Cream Tea ” , which is a pot of tea and scones with jam and clotted cream. I am in love with clotted cream. I don’t know what it is, looks like butter, maybe that’s why I love it. No, that’s not it, it’s a combination of whipped cream and frosting, I think, and it’s good. The jam is also excellent, it’s made here in England in Essex. We have to have a Tea Party when I get home. My sister-in laws(sisters) and I get together once in awhile and have a tea party. Not traditional but fun. I did make scones once when we had it at my house. We move around to each others house so we can all host it at different times and we all bring something. So I’m putting it out there, who want to host the next one? You don’t have to be a sister of mine, just say when? I promise to bring clotted cream, if I can figure out how to make it, and scones and jam. What do you say?
After our tea break we walk around some more, explore, we got thirsty again and go into a pub. Have I told you about the cider here yet? It’s good! It’s on tap at most pubs. They have all kinds of different ciders, we tried a blackberry one, really, really good. I do like the pubs. There is always people at the bar. There is aways a few old men, and there is always sports on the Telly. It’s fun to just sit there, drink your pint, and watch and listen to the people, I love how they talk.
Tomorrow we check out, leave our bags to pick up later and take a bus to Wells.
Until then,
Be well. 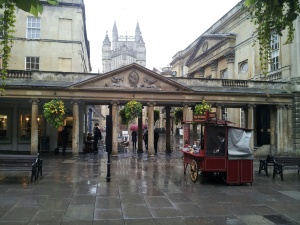 Going onto square by Roman Baths 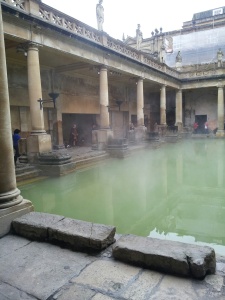 The baths, water is green because the baths were I closed in roman times, now they are open to the sun

This stuff still works and doesn’t leak from roman times! 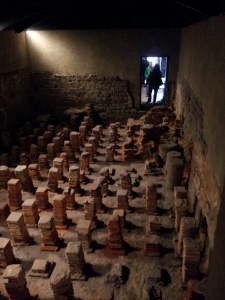 The water was naturally hot, but if they want dry heat these are supports for the floor, the slaves would have to crawl under the floor and leave buckets of hot coals 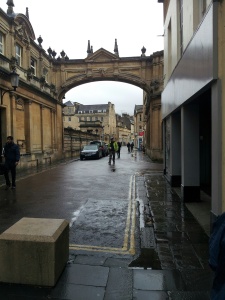 Arch over the road

Of course there’s a church

Other side of church 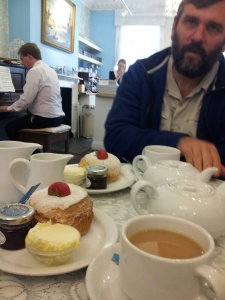 This town has decorated pigs!

Now we know where she got her start

Line to get into Sally Lunn’s