Having fun in Madrid

Al saw a real Dunkun Donuts yesterday, it tuned out to be a Dunking Coffee. Not sure what the difference is. Anyway, we, or I made a beeline for it the First thing we did. Al still not feeling good, he just watched me enjoy my coffee. So we are sitting in what they consider the theater district, almost a little Times Square. I take a picture with my phone, which was full yesterday. I had to move some pics to my iPad, I have taken over 1200 pictures with my phone. Al has also used his phone as a camera, and I brought my camera too. So we are sitting there, this gypsy women comes in. I was told she was Romanian, she was speaking to me, waving a sales thing literally under my nose, talking to me the whole time. I am leaning back, she is in my personal space, getting loud and insistent, waving this paper. What I don’t realize is that the waving thing is really a cover for her hand stealing my phone on the counter before me. She distracts all of us, even the people working there are yelling At her, ” get out, get out”, which she does, now with my phone. We don’t even realize that I was robbed until we leave and I automatically feel for my phone. I turn back to D&D and ask, “did you see my phone.” They immediately realize what had happened. I ask them to call the police. We waited for them to arrive, That took awhile.
The police arrive and ask us to go to the station with them. We got to ride in the back of a police car, not a highlight of our trip. Anyway, that took forever, I had
to dictate my report into a phone, kind of like transcription at the hospital but they asked me questions. I was given a number, 59 and said to wait until the report was printed. I would then have to speak to them again and then i could go. That took 3 hours. I was told lots of theft in Madrid. That you have to keep everything close and be super aware.
I am not as paranoid as Al, but we do keep things close, and we are aware. I am not saying this wasn’t preventable, but gee whiz, her timing was perfect. I just took my phone out, just took a picture, put my phone down to pic up my coffee, she comes in. That was basically it. If Al was on the other side of me, it wouldn’t of worked.
I know that all things happen for a reason. So after the police station, I made my way back to Al at the hotel. We had decided to separate so he could get a head start on the phone with AT&T.
We had just added all that data to my phone. We moved everything to his phone. I was never able to back my phone up to the iCloud because of wifi issues. So most of our pictures are lost, but we do have Al’s and the ones on my camera. Not a total loss, but regrettable.
So now it’s after lunch and I’m hungry, so first lunch then off to see more of Madrid.
Madrid is the Capitol of Spain. We walked past the palace again and into the art district. There is a lot of history here and they do adhere to taking siesta also. So again some shops closed up at 4pm and then open again at 7pm. We walked all over the place.
This is a very busy city, not New York busy. Our cab driver told us, 3million people live in the inner city and probably another 3 in the out skirts. Also that there are 3 rings around the city for driving. Sort of what DC has. And very clean. There is an issue with homelessness and with gypsies. Gypsies outright begging wherever you go, some of them are disfigured, limbs missing or just filthy dirty. A lot of the parks we went to the homeless had whole areas taken over by the homeless. They set up their boxes and blankets on benches and have what look like little communities. They even have pets. Lots of dogs and I saw one cat. The person even had a litter box outside next to it. Amazing. I saw nothing like a soup kitchen or anything like what you would in the city. Also the homeless we saw, seemed okay except they were basically camped out. Th gypsies are another matter. They were obnoxious. Following you, begging you for change, you just have to walk on by.
Tomorrow is another day,
Until then.
Be well.

Al started a door collection for me. 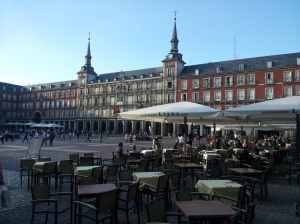 A cornet of Plaza Major, there’s arches in the corners for traffic to get through

Me on the street

This was a tapas market/bar. Like Quincey market, all tapas! Very cool!