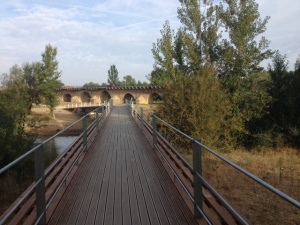 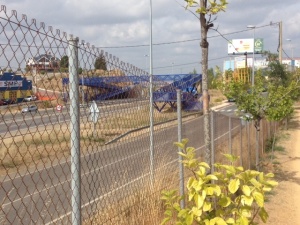 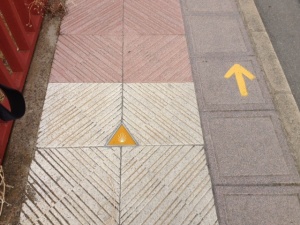 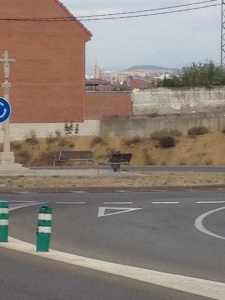 In the distance is the cathedral

This is part of the old way 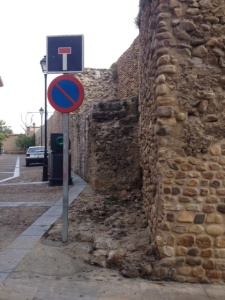 Ou can get an idea of how thick these walls are

This is our pilgrims passport with all the stamps so far, and the key to out room 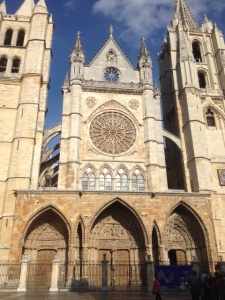 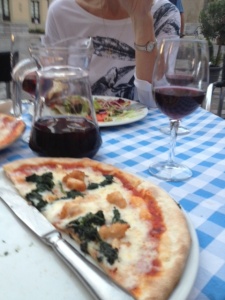 I took a pic of the explanation[/caption]

This was part of our trail today, not fun

A church coming into town

Before the old bridge

First off our guide book warns us about this part and even urges people to take the bus! It wasn’t that bad, mostly.
First off, we left in the dark and onto the senda, which is the path alongside the road. The first town we walked into was Mansilla De Las Mulas, we entered the town through the old quarter via the east gate, Puerta de Castillo, only a ruin of it remains. The closer we get to Leon, the more we saw a mix of the old and the new.
Al was having foot trouble today, he now has huge blisters on the back of both feet. He has decided to listen to me, hmm imagine that, and to wear his sandals. And what do you know, he can walk in sandals too, and they don’t hurt his blisters, problem solved! I won’t tell you how many days it took before he finally tried his sandals again.
Okay back to the town, it was pretty neat. We went over a medieval bridge and happened to look back and the sun was rising over the walls of the city. Incredible. Then the next bridge, over the rio Porma is called the Giant bridge, Puente Ingente, 20 arches! We thankfully used the pedestrian bridge.
Then back to our senda, we go into and out of a couple more towns before we hit the sprawl of Leon. We have to cross these big footbridges over the highway. Yah, I was scared. We took a break in the Plaza de Santa Anna. Lots of history here, we had to pass through Money Gate, Puerta Moneda and into he old city. We passed the 10 century Church of Our Lady of the Market.
Leon is a big city, pop. 130,000. Our guide book tells us at one time it was a Roman military garrison and base for it’s VII Legion, so the name , Leon. The cathedral here has 125 stained glass windows.
We knew we were going to the Parador. Oh my gosh, I’ve never been in a place so grand. It’s connected o the Museo San Marcos, and it seemed to me the hotel was part museum itself. The door to our room was incredible and the key was an old fashioned brass key that must have weighed at least a pound all by itself. And the best part, our room had a bathtub!
Al got to go first, he said he was in the most pain. Okay whatever, when he was done I could take as long as I wanted, which turned out not to be too long, I was hungry.
We walked all over Leon, probably a few km. We stopped in one of the plazas to share a pitcher of sangria, which I’m forming an addiction to, and we people watched for awhile.
Then we went in search of food, we ended up running into Avril again and ate together and shared yet another pitcher of sangria. We actually stayed out long enough to see the sun set. The end to a great day.
More tomorrow,
Until then, be well.

2 comments on “Heading into Leon.”