We left Itero de la Vega kind of late for us, 6:10. We still got to see a fabulous sunrise.
Then we walked next to a canal. Our guidebook tells us that in the late 18th century these canals were built to open up more land for farming. The canal itself is pretty and we saw a couple of gentleman crabbing, at least that’s what it looked like to me. They had baskets they were tossing out on long ropes. Al thinks they were fishing for minnows.
We came into a town that used to boast a pop. of over 2000 that has now shrunk to less than 200. Another pretty town with a big church. We stopped here for a coffee break at a fantastic albergue. It had a landscaped garden with a pool, iron worked sculptures and flowers in granite urns.There was a big apple tree in the center with a grape vine threaded through it. The best part was that they did not serve coffee in the traditional sense, first the owner/son sent us back out with two big cups, then he came out with these two pots, one had hot rich coffee and the other hot milk. His mom had made an almond cake and an apple tart. We resisted those. But we asked to get bocodillas to go, he said he would make us something better than the normal ham and cheese sandwich. He made a ham, cheese and onion omelet and stuffed that into 1/2 a loaf of homemade bread. I wanted to move in and never leave. We marked this in our book so next time we make sure not to bypass him.
We continued to walk along the canal, the sandwiches he made us for lunch we tore into as soon as we reached the corner after his cafe/albergue. After another 6km we crossed a lock into Fromista. Kind of a bigger town then we normally see, not quite a city I think. Lots of sidewalks. We had to walk along the road for another 3.5km into Poblacion de Campos, then still along the road for another 4.3 to Villarmentero de Campos. Where we stayed the night.
This is another place we want to make sure to revisit. She put on the best pilgrim meal we have had so far. Normally every meal has a 1st and 2nd course then desert. First course may be salad, soup or pasta, she served all 3. Lentil soup, then a fantastic salad, then a pasta with vegetables in it. Also it’s always water or wine, so a few bottles of each on the table. Then 2nd course they usually ask in advance, chicken or pork, not a lot of choices. She brings out fried chicken, some kind of chicken nugget, fries and calamari. Then for dessert, more choices, maybe ice cream, yogurt, flan or fruit, she brings out slices of 2 kinds of melon. And we could eat all we wanted family style, it is usually just a plate or bowl that they hand you. Once we were given a bowl and every course was put into the same bowl, kinda different.
Anyway greet place, she was a huge Bob Marley fan and his music blasted the whole afternoon. We shared a room for 8 with just 2 other gentleman. Had another early night because of an early start tomorrow.
Until then,
Be well. 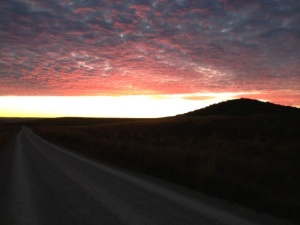 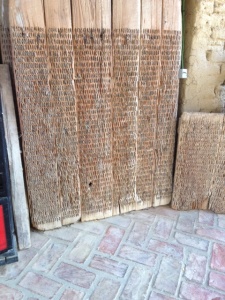 Anyone mow what this is, I’ve seen it a couple of times, my guess, to set rows in the garden. There are small stones set in it

This is what we walked almost all day