Every day I try to take a sunrise pic, just so I know which day is which

So pretty, I took another. 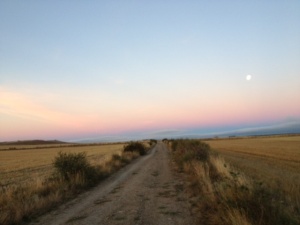 This is the moon setting, the colors were glorious 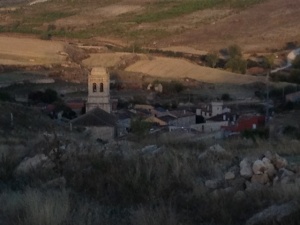 Coming down from Meseta, a town 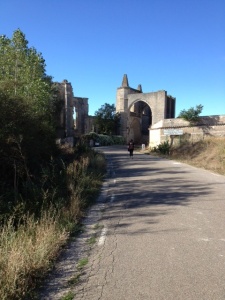 Coming up to ancient ruin

We passed right thru it

They had the ruin of a castle on the hill above

Part of the hill ahead 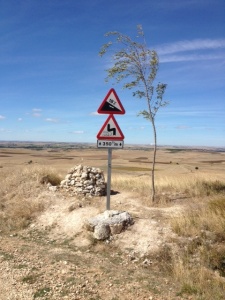 Al and Avriel, going down

Our13th Day.
We left town early in the darkness of pre-dawn. It is such a beautiful county, the windmill lights flashing on and off, the incredible full moon was actually causing Al to cast a shadow. I was afraid he was going to break out into song again, you know, moon shadow, moon shadow. I took a picture even though I didn’t think it would come out, but it did. I will post it for you. The sunrises are so awesome, I know I take a lot of pictures of them but I can’t help it. I have already taken over 1000 pictures on my phone. I have no idea how many are on my camera.
We caught up with a Dutch women we had met earlier halfway up a hill and watched the sunrise together. it is so incredible that we are meeting people from all over the world every day. We then continued to walk with her throughout most of the morning. We came down a hill and tucked into the fold of the meseta was the cutest little town. Hontanas also has a small population, 80.
After about another 5km a lot of walking on cement, we then passed the ruins of the covento de San Anton XIVth. According to our Brierley guide again, this was once an ancient monastery and hospice that was founded in the 11 century by the Antonine Order. On a hill over this town is another ruin that was once a castle. We stopped here again for another rest. And our Dutch friend decided to stay here in San Anton.
We also met up with the women who is Australian but lives in England and had given us all the tips about visiting her country. We walked with her throughout the day .We then passed through Castrojeriz, this seems to be a boom town, construction all over the place, restaurants, a shopping strip and even a hotel.
After we left this town little did we know of the climb we had ahead of us. First we had to cross over the rio Odrilla on a roman causeway. We climbed up Mostelares, there was a sign warning us that this would be a 12% incline, there were a lot of switchbacks but we continued to climb 900m. Then going down, another warning sign, the decent had an 18% decline. Oh my gosh, it was horrific, it went steeply down for 350m then a more gradual decent. And the surface was cement, I mention how we hate cement right? After a long day walking the last thing you want is to walk on cement.
I didn’t take a single picture after this, I was done, and we still had to walk another 7.6km. I was not exhausted, but emotionally spent. When we got to the albergue, finally, I just about cried. It was the worst I have felt so far. The bottoms of my feet hurt incredibly. Before arriving into town there were signs saying just ahead, or only 2km more, so it was in my head that we were done, but we weren’t. And it happened more than once, the road winded around and you could never see the town. Then another sign, a turn, another dirt road and we still couldn’t see the town. Another corner, there it was.
After a short rest, shower, some text messages from a dear friend and hand washing all our clothes, I was as good as new. I then dragged Al all over the little town. We found the grocery store, the most they ever have are 2 isles but they usually have everything you want. Then the town square had free wifi, so I was able to send a blog posting out and Al checked his e-mails. We looked all over to figure out where to eat and just ended up back at out hostel and had a pilgrim meal there.
Tomorrow no big hills, but we have more cement in our future,
Until then,
Be well.