House you could see thru

3 churches we past in Burgos, this is #2 at sunrise 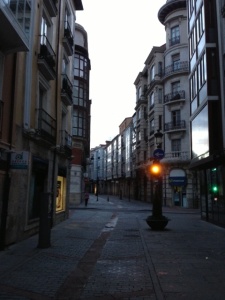 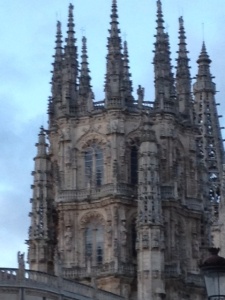 Close up, I wished I was a better photographer. 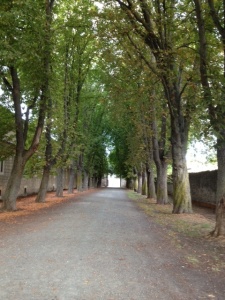 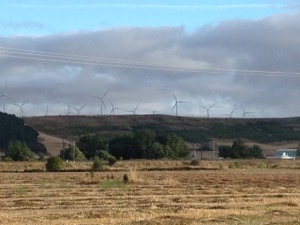 More windmills, there are everywhere 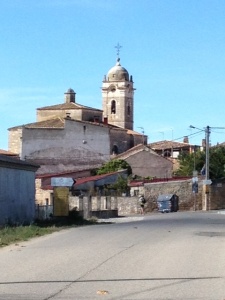 We decided to have a late start today because we never made it to the cathedral the night before. Catedral de Santa Maria, according to our Brierley guide is one of the most beautiful in all of Spain, also one of the largest. It was built in the 13th century and is essentially gothic. It was built with many different styles and has been further embellished by some great master builders and architects down through the centuries. It was still to early to pay to see the inside, and I only got pictures from two sides. It is magnificent.
It didn’t take as long to get out of the city as it did to get in and the scenery was nicer. Mostly parks and suburbs. Then we zinged and zagged around the highways and even passed the state prison.
We reached the small town of Tardajos, they had a marble map on the road coming in, it shows that they are almost the halfway point to Santiago, technically no. But we are getting close to that halfway point. We had a coffee break here, I would recommend the 2nd place not the first you come to for coffee. The next village we came to, Rabe de las Calzadas, pop. Is only 190. Can you imagine that, these towns are literally just a street.this town did have more then that and actually looked a little prosperous. Most of these towns owe their continued existence to the pilgrims walking the Camino. As the town we will be staying in tonight. But first the Meseta.
We walked on and up until we hit the Meseta. The Meseta is a large flat area , at the top of a smallish mountain, 950m. I kept asking Al, ” have we reached the crest yet?” It just went on and on, gradually up and up. then the top, at last, which was flat. All flatness for about 10km.
Finally we came down and there was the town we were heading to, Hornillos del Camino, pop 70. There is 1 store and 1 restaurant. I walked the whole street,(town), and the outside of some of the houses were just shells. No roofs, no inner walls, the town looks like it is collapsing.
We got a bed in the over flow area, then some others had to go to the gym, which is used when the overflow is filled up. us pilgrims may out number the towns people. No Wifi again, sorry, now I am a day late again.
Dinner was surprising good, the restaurant had a pilgrims menu and the food and company were excellent. We ate dinner with a French man and a Belgium. The Belgium man spoke 5 languages, he told us in that in Belgium, they have 2 official languages, Dutch/Finnish and French. He also went on to say that because they are a smallish county surrounded by others that a lot of Belgiums also speak German and some English as well. He spoke all these plus Spanish, incredible. I am struggling with just spanish. As Americans we really need to step it up in the language department, just my opinion.
Anyway we were stuffed and now sleepy, off to bed, a big walk tomorrow.
Until then, be well.

2 comments on “Out of Burgos”